Idly playing with my cards at the dining table, I asked Il Matrimonio what he was doing with the fish tanks. He kept two tanks of tropical fish at that time, guppies in one, neon tetras in the tank in the dining room.

Male guppies are colourful, every individual’s unique. The females are drab coloured.  They produce live babies, but the adults tend to cannibalise the newborns if they don’t make for the weeds as soon as they emerge, and hide there until they’re too big to be eaten. Awww. So sweeeet.

Neon tetras are small and slim, blue, red and white, with a zingy neon strip along their sides, as the name suggests.

The hubby explained that he was introducing a young male guppy into the tetra tank for his own safety. Whereupon, using my old Universal Waite deck that day, I drew The High Priestess. (US Games) 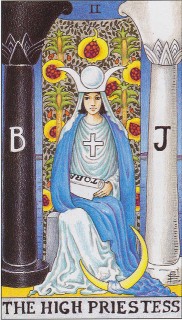 However, I work with reversed cards, and I drew her reversed. A reversed card is not necessarily negative in connotation. It may simply flag up an area requiring special care. But I felt this was a warning, to be read in a literal sense.

‘I don’t think you should do that,’ I said. ‘I’m seeing danger here from a lady who is blue, white and red.  I think the tetras will have him if you put him in there, and I think he won’t last two weeks.’

(Tarot can work like this with timing. The High Priestess is Major Trump 2.)

Il Matrimonio was having none of it. The tetras were no risk to the guppy, they were too small, completely harmless. What did I know about tropical fish, etc etc?

Eff all, it is true. Please, any proper a-fish-ionad-os reading this, do not troll me on this score. But the reader does not have to factually know. That is the point and indeed the potential usefulness of oracular divination.

‘Ok,’ I said, ‘in which case it is a warning against the tetra tank. I wouldn’t put him in there.’

A few days later, poor guppy was gone. RIP. Not so much as a fin left.

Not saying the tetras did it any harm. It might have been something about the tank, and maybe guppy was toast whatever Il Matrimonio did, but they certainly cleaned him away.

All we had left were the tetras, swimming innocently about,  the piscine little High Priests/esses in their grotto.