An artist wanted us to look at the year ahead in 2018. There was no specific question, and I drew 13 cards, one for each month of the year starting with January and laid them out anti-clockwise. The thirteenth card went in the centre and represented a key question, comment or theme, like so.

This is known as The Wheel of the Year Spread. There are variants.

Number 1 represents Aries the first House of the Zodiac and the start of the Astrological years.

The central question card, the Eight of Coins, suggested to me that the client wished to explore and discuss work this coming year, and maybe income. You can see for yourself the relevance of this card, drawn from The Legacy of the Divine Tarot by Ciro Marchetti. (Promotional video)

My eye was quickly drawn to cards 6-8. There seemed to be a flurry of artistic impetus collected there, heralded by the appearance of The High Priestess in position 6, early autumn in 2018.

The client draws, paints and sculpts animals, though not only animals, and is not only a very talented artist but a very generous patron of a number of small animal charities.

The High Priestess is an apt card for describing her. This is a lady well used to keeping her own counsel.  Her art is her shrine and it is sacred.

My eye was drawn to the owl. I could equally have chosen to focus on the scroll or the pomegranate but no, on this occasion it was the detail of the owl that drew me into the card.

Had she ever made a particular study of drawing or painting owls, or was she planning to? No, but the idea appealed, why did I ask?

Reader duly opened gob and proceeded to do a thing one could inelegantly describe as gob-shiting….ie speak and not self- edit or self- censor. 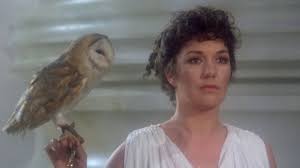 I was aware that the owl, specifically the Little Owl is the special bird of Athena, and that Artemis is the goddess and guardian of all wild creatures, but still, I had not read this card in this way before. Athena shown here as portrayed with her beloved ‘Bubo’ in Clash of the Titans.

We were doing the reading via Skype, using the web-cam.

‘Look at this, Katie-Ellen!’ the client leaned in close. ‘See this little medallion on my chain here?’

She held it forward to the camera.

She flipped it over…

‘And on this side, Artemis! How about that?’

How about that indeed.

She was delighted. It chimed a note she had been hoping to hear but didn’t have a question for finding, and this is typical of what Tarot can do when in full flow.

The Legacy of the Divine Tarot is a friendly, easy- to- use deck, modelled on the Rider-Waite and very suitable for any reader starting out.

The trick is to learn your stuff but then go with the flow. Easier said than done, but that’s what you need to do, to get those weird eureka! moments.

I’ll leave you with a picture of a Little Owl, Athene Noctua.  This individual is Dudley the Deadly, here he is, sitting on my gauntlet, the ferocious little scamp, and I met him at the Barn at Beal in Northumberland.

He pooped but missed my shoes. My lucky day.