Has Ukraine set a trap for itself of its own devising? That the Ukraine judiciary chose in January, with Russia growling ever louder, to summon to court former President of Ukraine, Petro Poroshenko who had fled to exile in Russia but flew in from Warsaw for this court case January 2022?

“On 25 February 2022, amid the 2022 Russian invasion of Ukraine, Poroshenko appeared on TV with a Kalashnikov rifle together with the civil defense forces on the streets of Kyiv. He also stated that he believed that “Putin will never conquer Ukraine, no matter how many soldiers he has, how many missiles he has, how many nuclear weapons he has… We Ukrainians are a free people, with a great European future. This is definitely so”- Wikipedia

Ukraine ordered in its own Trojan horse? Extraordinary timing of this court case. Mr Poroshenko has flown in from Warsaw (not exile in Russia?) Now in situ, out on bail, Mr Putin’s replacement of choice for Mr Z if/when Russia captures Kyiv?

Could Yanukovych, in the event of a conclusive Russian victory, offer Putin

The Joker is a card of destiny. Of a rebirth. It is a portal, the number Zero. It is the Tarot’s equivalent of The Fool. It is Odin, god of war. The god who hung nine days upside down on the world tree, and gave an eye to learn the runes, and the knowledge of all things.

And where does that leave Mr Z if Kyiv is captured? We drew this card before.

Zero draws the Number of the Fool

But only fools will fail to fear

The oddly smiling one who walks alone

Fleeting, glimpsed by tree and mere

Where ripples lap without a breeze

Or single casting of a stone

The other traded for all knowing

On Yggdrasil, the great ash tree

But Life is flux and unfulfilled

Entranced by their technology

Their blindly restless struggles to get free

Refusing that their final liberty

Is in their choice of sacrifice

In their direst of necessity

And sometimes smiles, but has no tears

Of conjurings and reckonings with Fate

The newborn come and dead depart

His scouts of Thought and Memory

The singing echo-chamber of The Gate.

PS: 20:35 PM There is a feeling that something new is afoot. If Pres P were to present Mr Z with terms, and if he has grave enough concerns re Kyiv, who knows, perhaps he may, then he could withdraw and still claim victory, if Mr Z agrees that Ukraine shall let go the 2 seperatist states in the Donbass and Crimea. Since Mr P has been telling the Russian people all along that these were his objectives.

#cartomancy I don’t know; is something shifting- 6 Clubs, Ace Hearts rev, 6 Spades, grief, loss, progress, healing, King Diamonds, Mr Putin? 3 Clubs, a meeting. New talks – a breakthrough? 3 -6 days (3 /6 Clubs) longest 6 months but no, will be sooner if at all. 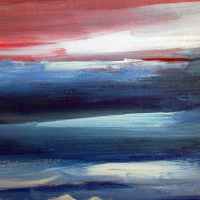