Last week Il Matrimonio asked me to look in my playing cards re the Arsenal v Chelsea Cup Final. See my previous post for the story on that.

So later of course, he was curious to know what the cards might say about the European Champions League on Saturday 3 June, Real Madrid v Juventus.

He left it rather late to ask me; The box was blaring, the the Black Eyed Peas performing in the opening ceremony.

Real Madrid:  The overall tone of the top row was positive, kicking off with an astute ‘money’ Ace, the Ace of Diamonds; the speediest, fieriest card in the deck , a happy crowd of supporters (6 Hearts) 4 red suit cards, and a solid young man in the centre facing futurity… a volatile game (5 Diamonds) and a happy ever after card, the Two of Cups. Excitement, talent, good news.

Juventus: the 8 of Clubs showed much to admire: a hard working performance with great early promise of a wish fulfilled (9 Hearts is the ‘wishes come true’ card)  The Queen of Diamonds, while female, nonetheless represents a speedy striker, but unluckily for Juventus, he is looking back, not forwards to the outcome, and then we have the infamous Ace of Spades. ‘End game’. Some issue there…a foul? An injury?  and the outcome card the 6 Clubs. Not in itself a bad card; actually quite a positive one; problem resolution, favourable publicity…had I not drawn the Ace Spades, I’d have struggled to reach a decision.

I shouted to Il Matrimonio that it looked to me like Real Madrid for the winners, and he said  they had won the European Champions League eleventy million times, or words to that effect, but he thought it would be Juventus this time, based on their recent form.

The first goal was scored by Ronaldo, 20 minutes in (harking back to that speedy money card, the Ace Diamonds.) He got straight ‘on the money.’

Sourced online, this funny pic from The Sun. 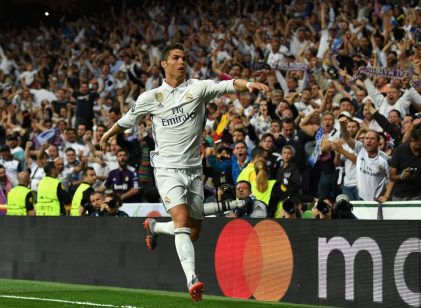 Juventus scored their goal only seven minutes afterwards: Croatian forward Mario Mandzukic, sorry Mario, I don’t know why you showed up as the Queen of Diamonds, but never mind, I am sure this achievement made a fond lady very proud.

‘One of the finest goals seen in a Champions League final,’ The Independent.

But what was that Ace of Spades about for Juventus? Would there be there a ‘black mark’ awarded against Juventus, or might there be an injury or, God Forbid, something far worse?

A reader doesn’t know anything. Not as such. They must wait and see like everyone else. They are functioning rather, as a kind of radar.

‘Juve finished with 10 men after Juan Cuadrado was sent off in the 84th for a second yellow card after pushing Sergio Ramos.’ – The Independent.

I just this minute looked it up. Il Matrimonio lost interest the minute the match was over, but the reader has to do these forensics.

And it struck me that the Ace of Spades was also foreshadowing the attack that took place in London’s Borough Market less than an hour after the match ended.

By the pricking of my thumbs

Something wicked this way comes.

One card will often convey more than one message. Sometimes it is like peeling an onion. And this is how you learn the cards.  Shuffle blind, draw and proceed to speak of what you do not know, because you CAN’T ‘know’, right?

How can you know if you cannot account for how you know?

How do migrating birds navigate in fog? How did the elephants know that a tsunami was coming and flee uphill in panic before the people knew? We don’t know the limits of the workings of our five senses to declare with any finality how knowledge is arrived at, or to pronounce there is no sixth sense, when that may actually be an fifth sense operating on a more acute physical basis than we understand, but that produces the all too common phenomenon of ‘the lucky guess.’

Afterwards, you, the reader, need to dissect where you went right and where you went wrong or you missed a clue, adding those findings to your lexicon for a given card and its most specific real life applications.

Cards for the forthcoming General Election:

Question: Who will be PM after 8 June? 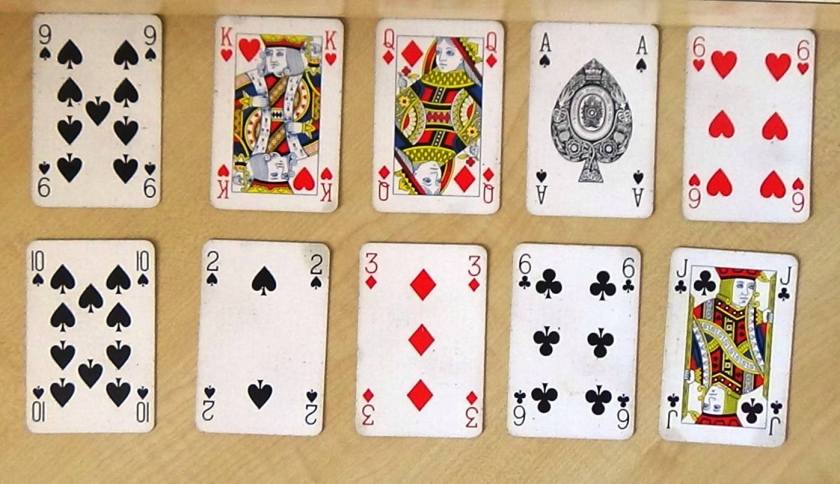 Both rows start by reflecting the tragedy of the recent terrible crimes of Manchester and before that Westminster Bridge. These cards, the Nine and Ten of Spades, reflect significant personal distress as well as stress attached to both TM and JC. And to my dismay I saw the Ace of Spades again, sitting in futurity…not far off.

TM is the shrewd but fiery Queen of Diamonds. Not typical of TM! Usually she appears in my cards as the cool and quiet Queen of Spades or Hearts. She is looking back at the King of Hearts, her gaze resting upon her opponent, JC, but also symbolizing her regard I think, for a supportive male figure, a quiet figure, very likely her husband and/or a trusted political adviser.

What did the next card denote, the Ace Spades? It seemed to be pointing at some near future development, possibly sudden and strongly negative. I thought it may refer to future fall-out in consequence of the televised debate (I found the whole thing nigh on unwatchable, myself) TM was censured for not being there, JC praised for being there (although, since he apparently changed his mind very late in the day, could the absence of TM have been a factor in that decision?)

Horrifically, these cards being drawn with less than 48 hours to go, I now think the Ace of Spades was not talking about that at all, but was foreshadowing  the murders in the Borough Market. on Saturday night

There are no words adequate to convey the sorrow, pity, fury and detestation. And disgust.

The Six Hearts, well, I don’t know, but TM has said she must not lose six seats or she loses the majority. Had I drawn the Six Spades, I would take it as a strong possibility that the Cons will lose those seats lost, but the Six Hearts looks (literally) like six ‘bums on seats.’

Does it look like the landslide victory projected at the outset of the election campaign? Mehhhhh.

I don’t know what’s going to happen any better than you do, but for a landslide victory, not saying it couldn’t happen but I’d expect a higher value card or any ace, so long as it is not Spades. The Ace of Spades incidentally, has a fearsome reputation but is not necessarily malign, at least, not in theory. It may denote  a clean sweep, a judgement,  necessary upheaval as the prelude to a fresh start.  It can denote a great victory, but

a) it was not sitting in the final outcome position

b) there is a malign something in the air and has been in my own experience, since late last summer at least. There is always trouble afoot somewhere in the world of course, but there is just this…something; despite the fact I actually feel optimistic about many things, including the future success of the UK over the next nine or ten years.

Turning the focus to JC now, and that Ten of Spades, he looks deeply upset not only by recent events, but a very recent rift in his inner circle? (2 Spades)  Could it be something connected with the initials DA? (Did I say that? No. I didn’t say anything.) The central card, the Three of Diamonds is the only red suit card in JC’s row, compared with three red suit cards in the TM row, but this one red suit card is the hinge card, some crucial factor:

The Three of Diamonds: a payment, usually small; a small sum of money, financial growth, partial success, scattered energy and focus, on again off again, perseverance is needed for success.

This is the challenge for JC as presented here, but should  these same qualities be demonstrated in the Conservative party they might, by the same token, represent an opportunity for Labour, and this card is followed by two positive cards. The Six of Clubs denotes movement, progress, renewed energy and ideas, and then, in the outcome for JC, we have the Jack of Clubs.

Should Labour be defeated on June 8, which is still presented here as being more likely than not, and if you lay cards, what does it look like to you from where you are sitting? Labour look rather as if they will be down but not out for the count. The Jack of Clubs is a vocal, vigorous card and suggests the emergence of young voters and in the near future of the party, new blood.

People don’t fit into nutshells, and nor does the electorate, cartomancy deals in symbolic representation. Could it be some future coalition?

Queen of Diamonds Intelligent,  imaginative,  energetic, professional  woman  who  is  cultured  and financially secure. She might be a business woman, media professional, a bank manager, or a government official (!)

King of Hearts Family man, protective and paternal. Good-natured, affectionate and generous. An adviser, counsellor, artist, teacher, priest or mentor. Male loved one or member of the family. Introspective, contained, systematic, an artistic and/or romantic sensibility.

As I mentioned earlier, I drew these cards last Thursday and have been tempted to draw them again and do this reading starting fresh. But whether I get it right or wrong, I have to learned to stick to the findings of my first draw. Anything else is to confuse the picture. Once more unto the breach, my friends, let it fall as it may and let us all hope, for the best and highest interests of the general national well-being.

Will there be a hung parliament?

Seeing the answer as a 4/10 but that’s not the strongest answer I might have expected, no one might imagine, given the expectations at the outset of the General Election campaign. There’s a surge of emotion afoot, it’s very strong, it may be affecting the reading, and that would be entirely natural, but we have all seen this last year and been reminded…there are always those who simply keep their counsel and it’s between them and the ballot box… the quiet ones who save their breath to cool their porridge.