Most of us know our zodiac or sun sign, but what does it look like in the night sky, and what’s the story behind it? This month it’s Gemini’s star turn.

Symbol: The Roman numeral for 2 joined top and bottom in  representation of unity

Affirmation: ‘I think, I inquire.’

Birth Stone:  If born in May, Emerald. If born in June, Pearl (although it is not a stone, it is thought to be ruled by Mercury) Lucky stone Tiger’s Eye

Tree: all kinds of nut trees

Flower: Lily of the Valley, Lavender

Tarot cards: The Lovers (love, choices, decision-making) and The Magician/Jester/Trickster

The Astronomy of Gemini

Gemini is a constellation in the northern sky, one of the constellations in the zodiac, the name for the area of the sky we see from Earth, including the apparent paths of the sun, moon and planets.

The Gemini constellation has been described by cultures since ancient times, with many different names and stories. It was listed as one of the 48 ancient constellations by Greek astronomer Ptolemy in the second century, though Ptolemy called it The Star of Apollo (Castor) and The Star of Heracles (Pollux).

Gemini is the northernmost constellation in the zodiac, high in the winter sky in the northern hemisphere, and is the thirtieth largest in size. Gemini can be seen by the naked eye, looking north east of the constellation Orion between the Taurus and Cancer constellations.

Best viewing is during February. By April and May, the constellation can be seen soon after sunset in the west. The two brightest stars in the constellation are Castor and Pollux, representing the heads of the twins from Greek mythology, while fainter stars outline their bodies. Pollux, the westerly twin, is a red giant star, 33 light-years from Earth while Castor is about 51 light-years away. A light-year is the distance that light travels in a year – about 6 trillion miles/9.6 trillion kilometres.

Pollux is the brighter of the two stars, and has a massive planet orbiting it; Genorium Beta, 1.6 times bigger than Jupiter. Castor is actually not a single star, but a star system made of up six stars not visible to the naked eye. 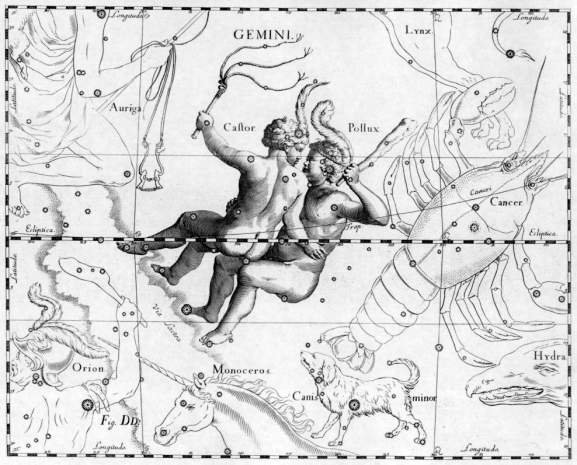 The concept of twins in mythology goes back at least as far as the so-called Age of Gemini, during the Palaeolithic, 6, 500 BCE, arising from our understanding of the duality fundamental to the nature of reality. There are male and female twins but many twin brothers in particular in world myth, standing for night and day, light and dark, heat and cold, male and female, war and peace, good and bad, life and death, and the creation myths of ancient cultures reflect this eternal battle of seeming opposites.  Many surviving objects feature twin gods and goddesses; a major theme across all cultures.

The Astrology of Gemini

The ‘twin stars’ have been recognised as representing twins across all cultures, each with their own names and stories. In Arabic astronomy the twins were seen as peacocks, In Egyptian astrology they were twin goats, or else the two gods, Horus the Elder and Horus the Younger,  while classical Greek mythology identified them as the twin brothers, Castor and Pollux, The Gemini; the name by which the constellation is still known throughout the western world.

Castor comes from the Greek Καστωρ (Kastor) and means “to excel, to shine.”  In Greek myth Castor was a son of Zeus and the twin brother of Pollux.

The circumstances of their birth were unusual to say the least. Queen Leda of Sparta was seduced by Zeus who had disguised himself as a swan though perhaps that was putting it too politely. He glided up preening, and pounced on her while she was bathing. Later that evening, notwithstanding this undoubted shock,  she also slept with her husband King Tyndareus and went on to produce four children; Castor, Pollux and their sisters Helen (later Helen of Troy) and Clytemnestra (later married to Agamemnon as queen of Mycenae) Pollux and Helen were immortal, fathered by Zeus, while Castor and Clytemnestra were mortal, fathered by Tyndareus.

Image Below: Public Domain, the young Castor and Pollux (Meissen) 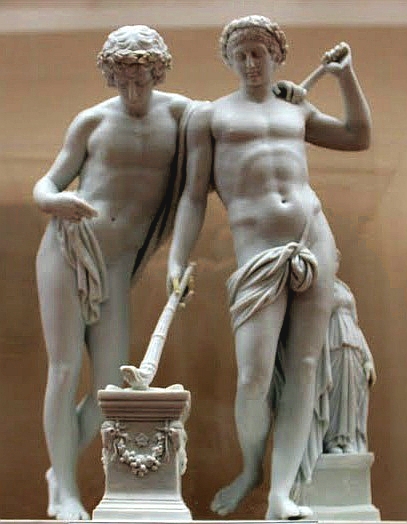 The brothers were handsome, curious and shared many adventures.  The mortal Castor was a renowned horseman and a master at fencing, while Pollux was known for his great strength and skill at boxing.

Castor was killed in a quarrel, possibly a disagreement over dividing the spoils after a cattle raid, and Pollux was distraught.  He didn’t want immortality, not if it meant being without his twin brother. Pollux begged his father, Zeus, for help and Zeus scratched his head, wondering how to fix this, and then decided to place them both in the stars, to be together forever as the constellation Gemini.

The Greeks worshipped the twins as gods who helped shipwrecked sailors. Later the Romans developed a cult around Castor and Pollux dating back to 484 B.C. A temple to the twins was built in the Roman Forum in 414 BC in thanks for their help in defeating the Latins; an old enemy, in the battle of Regillus. The Romans considered Castor and Pollux the patron gods of horses, and of the Roman mounted knights; the equites and Castor and Pollux appear on many early Roman coins. 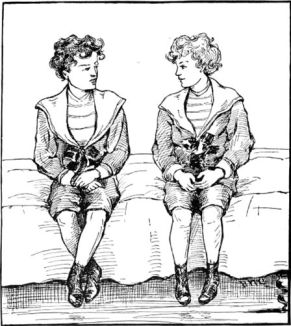 Gemini is ‘mercurial’, restless but independent minded-  and like the Tarot’s Magician, does things his or her own way, whether or not this is necessarily a good idea.

Gemini often has a pleasing appearance; slender, well-proportioned and above average height, with neat features in an oval face. Classic Gemini subjects are lively, agile, sparkling, charming, chatty and inquisitive, but not necessarily easy to get close to.

Gemini tends to change jobs more often than subjects of the other signs of the zodiac, and is better at starting new projects than finishing them, but can do very well in teams where new ideas, agility and a talent for networking are needed. Gemini could be the perfect journalist, TV or radio presenter, columnist, salesperson, or literary or travel agent.

Gemini has charisma, but can occasionally come across as superficial, fickle, or careless, even ruthless, dropping people and projects once they lose interest, which Gemini can do quite suddenly. But once truly committed, they are intensely loyal to their friends and loved ones. Gemini is mostly fairly peaceable, but they don’t shy away from saying what they think, and if anyone tries to back them into a corner, quicksilver Gemini comes out fighting, and Gemini has plenty of physical courage, but also stealth.

One thought on “Double Trouble, Twice as Nice,it’s Two For The Price of One- Gemini!”